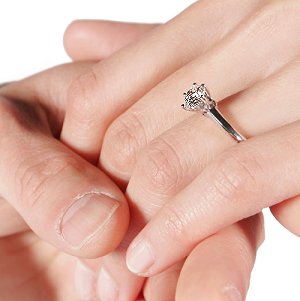 The USCIS estimates 20,000 annual Fiancé Visas are filed each year. Fiance/e petitions provide a streamlined procedure for U.S. citizens (but not permanent residents) to simplify the marrying of foreigners by obtaining for the foreign fiancé/e a "K 1" nonimmigrant visa, and their minor (under age 21) which permits the alien to enter the U.S. to marry. Once a Fiancé/e petition is approved it is forwarded to the U.S. consulate in the home country of the intending immigrant. At the port of entry the fiancé will receive work authorization. They are required to marry within 90 days of entry or lose their lawful status and be subject to deportation. Pursuant to technical amendments to the law, a "K 1" visa holder must marry the fiancé/e petitioner to be able to file for adjustment. In other words, if the parties did not marry but instead broke their relationship, and the alien fiancé/e subsequently married another U.S. citizen, the alien could not adjust status in the U.S. He or she would have to go through consular processing abroad and reenter the U.S. as a conditional resident. If the marriage takes place, the K-1 nonimmigrant and the K-2 children may be adjusted to Conditional Permanent Residence status. (good for two years). This is a separate procedure called adjustment of status. A Kit is available for this procedure.

To curb perceived "mail order bride" abuses and to insure that the couple stays married, The Immigration & Fraud Act was passed. It made two significant changes from prior law by restricting fiancé/e petitions. First, it added a requirement that the parties must have met within two years of filing the fiancé/e petition. Second, it crated a new status called "Conditional Temporary Resident." Under current law, within 90 days of the completion of 2 years as a Conditional Resident, an application to Remove the Conditional Status and to convert to Permanent Residency has to be made. This is a separate procedure for which there is a Kit available.

Procedure After Entry into the United States.

NOTE FOR THOSE THAT PREVIOUSLY OVERSTAYED THEIR ENTRY PERMIT:

Articles related to this topic

Moses Apsan and his staff, based in New York City and Newark, NJ provide exceptional legal services throughout the world, in all aspects of immigration to the United States, including non-immigrant (temporary visas), immigrant visa (Green Card) and deportation defense. In addition Mr. Apsan, has been practicing Bankruptcy law and Divorce laws for over 35 years, He was the President of the Federal Bar Association, New Jersey Chapter (1997-2002). He speaks Portuguese and Spanish..

Immigration news
Unexpected Opportunity for Pilots to Obtain Green Cards in the United States
A unique opportunity for pilots from every edge of the globe to acquire U.S. lawful residency (Green Card) has emerged. Currently there is an increasing scarcity of pilots in the United States, which ...
WHEN NO 601 WAIVER IS ALLOWED, THE IMMIGRATION PERMANENT BAR CREATES A NIGHTMARE FOR MANY FAMILIES
It came as a surprise to Joseph Monetti (name changed for privacy) when he found out that his wife of 10 years and mother of three of his children, would not be granted legal status in the Uni...
HOMELAND SECURITY IS STUCK WITH DACA, FOR NOW
WASHINGTON — In the midst of a passionate political struggle about DACA, the program that protects from deportation young immigrants who, as children, were brought illegally to the Unite...
New I-601A Waiver Keeps Immigrant Families Together
Helena Santos entered the U.S. though the Mexican border in 2005. Years later she married an American citizen. They now have three children together. Helena’s husband took her to an immi...
“Forward, or Backward?” - The GOP Descent into Immigration Madness
The Greek philosopher of Ephesus ( 500 BCE), is best known for his doctrines that “there is nothing permanent except change.” Not so with the Republican Party. As the world transforms, an...
Donald Trump and the H-1B
Donald Trump has been very vocal with his opinions about the H-1B visa program. He has not been clear in terms of what his actual plan for the program is, but earlier this year he was quoted...
Supreme Court Decision would affect millions here illegally
WASHINGTON— The intense political fight that would    affect millions of people who are in the United States illegally arrives to the Supreme Court on Monday. The court will decide th...