Great News --  You can get legal status if you entered Illegally and
Married a U.S. Citizen or a Green Card Holder.
Even if you were ordered deported!!!
You can be granted a waiver for your unlawful status
BEFORE  you leave for the consular interview and return in about 3 weeks.
Our Office has Hundreds of cases approved!

Without such a waiver the applicant would not be able to return to the U.S. for a period of not less than 3 years. In other words, under the prior regulations, these immediate relatives and spouse and child of a Lawful Permanent resident cannot apply for the waiver in the United Sates and would not receive their Green Card until after their immigrant visa interviews abroad. As a result of their unlawful presence in the U.S., these relatives had to remain outside of the United States, separated from their spouses, parents, or children, while USCIS adjudicates their waiver applications. In some cases, waiver application processing took well over one year, prolonging the separation of these immediate relatives from their U.S. citizen spouses, parents, and children.

The waiver process allows eligible immediate relatives to apply for a provisional unlawful presence waiver while they are still in the United States and before they leave to attend their immigrant visa interview abroad.

Once abroad the process take only 3 weeks. You may remain in your country for up to 4 weeks to visit family and take care of business.

Entering the U.S. is simple and about 30 days later you receive the Green Card in the mail.

Aliens who have already been ordered deported or removed.

If you have been ordered Deported or Removed, you will also qualify. However you will need to apply for 2 different waivers, one for being ordered deported (i-212) and the other for having remained in the U.S. illegally.(I-601A) 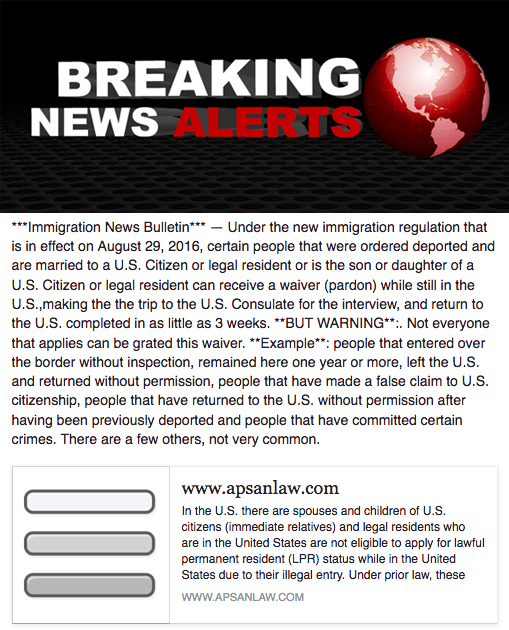